29 students from UNESCO Network of Schools in Haiti are sharing life lessons with the adult generation who leads the country through fables—33 in total—about MINUJUSTH mandate areas. According to the students who are participating of a fable contest launched in July, interests have replaced values, which has caused the many problems faced by the country.

“By writing a fable I started to prove that I want to change my country, but I don’t want to stop there,” explained Coralie at the closure of the eight creative workshops facilitated by Haitian writers Frankétienne and Savannah Savary. The workshops were carried out at the National Commission for Cooperation with UNESCO. 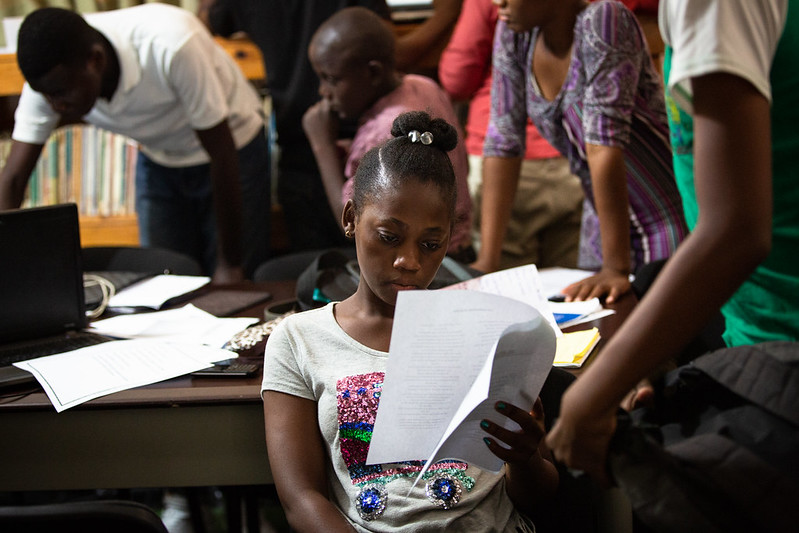 Using their imagination, the students portrayed animals, legend creatures, plants, objects or even professions and social activities (the Peasant, the Judge, the Trader, the Mayor, the Vagabond) who, in their fables, represent limiting beliefs that make individual behavior negatively impact communities and society.

“Each one of the 33 fables are part of an awareness raising effort that we invite everyone to read, share and discuss. These fables, written by 29 students aged 15 to 24 describe with force what, according to them, is blocking progress and positive change in the areas of public security, rule of law and human rights, which are at the core of MINUJUSHT mandate,” said Sophie Boutaud De La Combe, spokesperson for the United Nations Mission for Justice Support in Haiti during the press conference that launched the contest on 26 July.

“Through the values surfaced in their fables, these 12 girls and 17 boys from the UNESCO Network of Schools identify lost values, sacrificed to personal interests,” Ms De La Combe stated.

“This a great life lesson that these kids are sharing with those who are leading the country and society: interests have replaced values. Being it in public security, rule of law or human rights, the students are expressing the extent to which personal interests are at the crux of current problems,” the spokesperson added, inviting the media to disseminate the fables and to organize discussions with their audiences “to engage, reflect and act to promote positive change.”

All fables are being posted under the tab “Articles” of MINUJUSTH Facebook page and will be shared, one a day, from Monday to Friday by the writer’s name in alphabetical order, so that the public can vote.

A contest with 12 winners

There will be 12 winners. In each category the boy and the girls who receives more votes from the public will win a prize. Besides these 6 winners by the public vote, there will be another six winners chosen by a Jury of intellectuals and experts who will vote according to a scale for each criterion (creativity, coherence with the theme, inspirational force).

« Allow me to thank l’UNESCO, artists Frankétienne and Savanah Savary, as well as all the participating student for their vision, passion, creativity, will, energy, force, talent, generosity and camaraderie towards one another even if this is a contest,” concluded MINUJUSTH communications chief, inviting the audience to vote on their preferred fables.

The winners will be announced during an award ceremony on 21 September 2018.

The project will continue with the presentation of the winning fables in the participating schools, to be followed by illustration by Haitian artists and publication, to continue to foster social mobilization about the themes and values identified by the students in their fables.